Central AC athletes had a record breaking weekend at the East District Championships at Grangemouth, winning a 31 medals including with 16 championship titles and smashing two club records. 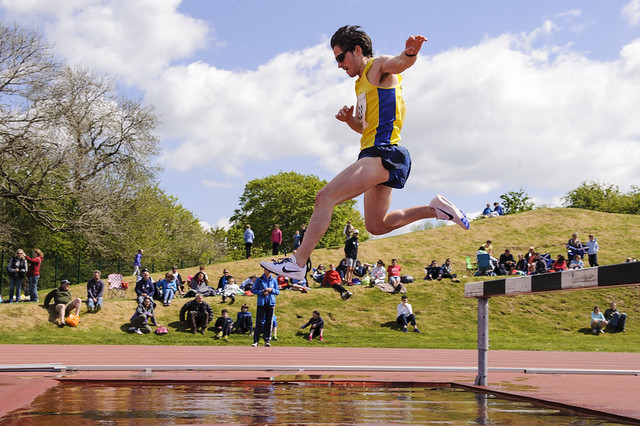 Catriona Laing picked up two titles as she won the Under 17 200 metres final on Friday evening  in new personal best time of 25.85s and then bettered this the next day with another win in the 300 metres, this time taking a full second off the club record as she recorded 40.43s. Emma Mailer  made a further improvement to her own under 15 300 metres championship best performance winning in 41.54s and bettering her own club record in the process.

A stand out event for the club was the Girls Under 15 hurdles where the final saw three Central athletes battling it out for the title and seeing them land a 1-2-3. Katie Sharkey (11.65s),  Briagha Cook (11.70s) and Lucy Davison (11.80s) showed the club’s dominance in this discipline. Lucy Davison took the honours for most successful Central athlete by also winning the long jump with a new personal best of 5.20m and in another core discipline of the pentathlon won the shot put with a winning throw of 11.33metres. Further jumping success came to Katie Burr won under 13 girls long jump with a new personal jump of 4.44 metres.

More hurdling successes came to the club through under 13 girl hurdler Coirilidh Cook who won in a new personal best time of time of 11.88s. Upping the distance, there were further successes In the under 17 men’s 400 metres hurdles as Jack Houghton won with 58.90s and Sarah Pearson won the Under 20 Ladies race in 65.45s with both also gaining silver medal success in the sprint hurdles.

Further improvements in personal bests were needed to take the top podium spot in the middle distance events as Aidan Thompson swept past the field to take the senior 1500m title in 4:02.99. Iain Davies gained confidence from his Friday evening bronze in the Under 20 1500 metres where he had a 10 second improvement in his best time to next day win a close fought 800m with a time of 1:58.81. The under 13 800 metres also gave Amy Kirkpatrick a chance to better her silver medal placing in the 200m from the previous evening as she turned the tables on rival young athletes who had been beating her in league marches. Amy put in a drive for the line on the back straight to win with a clear margin in 2:26.14. With no steeplechase available at Grangemouth, Michael Wright travelled to the West District Championships in Kilmarnock to win the senior 3000m steeplechase title with his 9:39.8 clocking.

John McLennan took Central’s only gold in the 100 metres series with a 11.38s clocking for under 17 100 metres.  Cameron McCorgray was the best male high jumper over the championships as he took the under 20 high jump with 1.90m.