Congratulations to all the athletes who came and represented their club in the Forth Valley League at Grangemouth stadium. Thank you to Nicola Almass, Catherine Malley and Judith Dinwoodie, the other Central AC team managers who put in a great deal of effort before, during and after the event. A particularly thanks for all the helpers and Forth Valley League team who made the event run smoothly.  Full results can be found here:

Central AC’s junior team competed in the second match of the Forth Valley League at Grangemouth Stadium with twenty one top three finishes and a heap of personal bests and top performances.

In a busy meeting with three divisions and 31 teams on show, Central had two teams, one each in Division 1 and 2. Division 1 was a closely fought competition with only eight points between fourth and seventh place. In the under 15 boys Neil Casserly (26.6s) and James Isgrove (26s) both ran strong in the 200m gaining new PB’s. Neil and James were joined by Euan Smith and Erik Escala for the 4x100m relay and finished the day on a high, finishing third with a time of 52.1s. Elis Graham-Marr ran a fantastic 1500m for the under 13 girls coming in third with a time of 5:43.6. The under 11 boys performed excellent in the 600m with Connor Bell (1:50.9) finishing 2nd in the A string and David Kirkpatrick (1:59.7) finished 3rd in the B string. Full team list; Anna Hewitt, Ellie Watson, Melissa Turnbull, Sameeha Almass, Bryony Smith, Rebecca Cumming, Naomi Howlieson, Elise Graham-Marr, Sophie Poulter, Ciorstaidh Ainsworth, Ava Smith, Rosie Eckersley, Connor Bell, Gregor Saunders, David Kirkpatrick, Alistair Banks, Harris Almass, Finlay Marchant, Angus Henderson, Ben Isgrove, James Isgrove, Neil Casserly, Thomas Woods, Angus Davis, Erik Escala and Euan Smith.

Central’s Division 2 team put up a strong fight against some great opposition. The team excelled in the field events with 4 first place finishes and a swarm of PB’s.  Celie Duncan was a clear winning in the under 11 girls Shot Putt with a distance of 5.08m, achieving the clubs Bronze standard and a new PB. Anna MacKinnon finished first in the Long Jump B string with a jump of 3.44m gaining a new PB. The under 11 Boys Javelin was dominated by Central with both Andrew McLay (21.83m) and Rowan Stephen (13.98m) finishing first in the A and B string respectively. Both boys and girls under 15 relay teams finished in third place and concluded the morning’s competition. Full team list; Celie Duncan, Leah Stenhouse, Cora Morgan, Rachael Dinwoodie, Ellie Ross, Anna MacKinnon, Heather Hale, Lucy More, Rowan Clarke, Maisie Campbell, Briagha Cook, Owen Eckersley, Andrew Twigg, Andrew McLay, Rowan Stephen, David Cunningham, Cameron Dinwoodie, James Smith and Euan Bryce.

If you are available to compete in the final match at Grangemouth Stadium on the 25th June please contact the relevant team manager or speak to your coach at training. 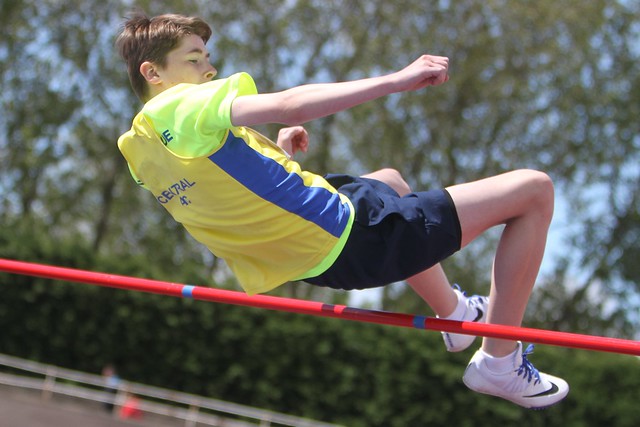