Central AC struck gold at the National ‘long course’ relay Championships as both under 17 and under 15 ladies took top spot on the podium in the 4 x 300metres relays.

A team of Abi Davison, Shona McLay, Katie Sharkey and Emma Mailer were the favourites going into the race but exceeded recent form as they not only won the race decisively, but destroyed  the  2015 Scottish record.

Three of the current quartet took this in 2016 but they bettered  it by a margin of 4 seconds and shot to the top of the UK rankings with a time of 2:49.40.

The Under 17 Ladies team were an unknown quantity with some runners entering new territory of 300/400m running. The race soon settled into a battle with a strong Pitreavie team with Central first leg runner Lauren McCulloch, and then Lucy Mason and Madeleine Woods on legs two and three battling to keep  the Central team firmly in contention a few metres off the lead coming to last changeover.

Anna Cameron on last leg was able to storm into the lead and bring the team to victory in 2:52.19 the third fastest U17 time in UK this year.

The under 17 ladies 3 x 800m team had earlier taken a fine set of silver medals as Kate Gallagher, Heather Scott and Lauren McCulloch ran a fine race to finish just behind an Inverclyde team with a time of  7:21.58. Central’s under 15 boys team of Euan Smith,  Thomas Woods , Innes Huckerby  and Daniel Ferguson,   finished fourth in 3:00.19 and Central’s senior men’s team in the 3 x 800m series of Bradley Scott, Fraser Logan and  Dale Colley  took a fifth place in 6:15.49.

championship with Lucy Smith in bronze medal placing, with Lucy Davison winning the shot put and placing second in long jump and hurdles whilst Lucy Smith took top points from the high jump and was second placed in the 800m.

Amy Kirkpatrick had a good day, winning the 800 event on the way to fifth place overall in the under 13 Pentathlon championships. Katie Burr took top points from the hurdles element but dropped out the of the medals in the last event of the day to finish seventh overall whilst Matt Chandler took  bronze despite no-heighting in the pole vault. 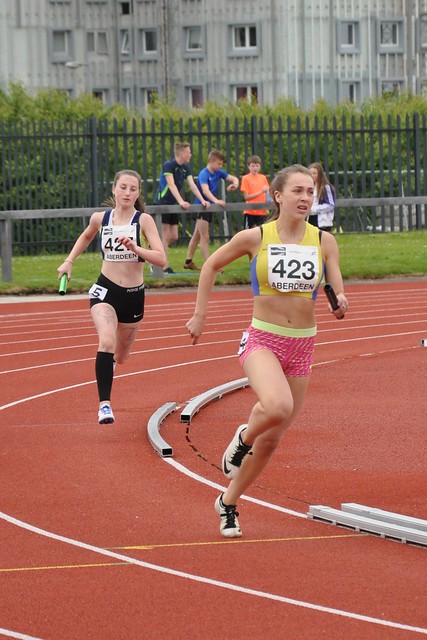