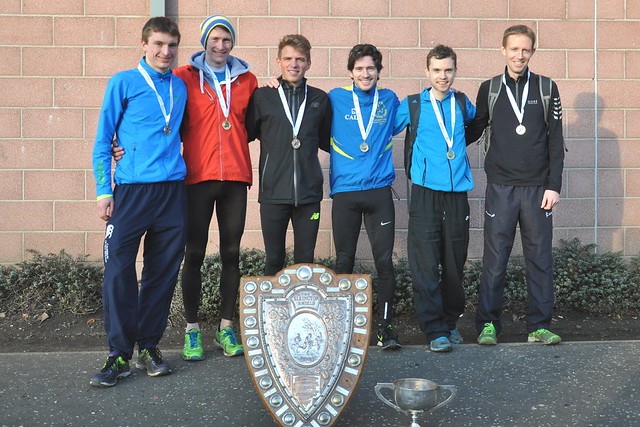 Central AC senior men’s made it six championship wins on the trot in the National Cross Country Championships with Andrew Butchart anchoring the team with the individual trophy for the second year in succession. The event with 130 years of history saw the largest ever field of over 2500 entries racing over Callendar Park course at Falkirk.
Andrew Butchart was a firm favourite for the race, following on his success of 2015 and showing good form in recent weeks, but he still had a tough 12km course to take on with contenders who fancied their chances. After a steady first lap he broke away from his rivals to hold a comfortable lead to the finish with a time of 40.02 for the 3 lap overall course of 12km. Alex Hendry was next in for Central, with a fine fifth place (41.13) pushing for bronze medal place for most of the race. The Central team effort was now very much about packing the top six team positions and battling team-mates for bragging rights. With Central top 6 finishers all coming in the top 17 place, the team title was comfortably in the bag through Ross Houston (12th, 41.57), Conan McCaughey (14th, 42.18) Michael Wright (16th, 42.29) and Cameron Milne (17th, 42.32). Central had commendable backup with 25 other senior men runners in a huge field of 650.

For the Central ladies, Fanni Gyurko posted another great performance to finish 5th with 31.57 for the 8 kilometre race. Fiona Thompson was 15h in 32.46, Patricia Milne 108th with 38.11 and Alison Curry 239th with 47.38 in the largest field assembled for the event. Stirling-based Fanni is fighting for a place in the Hungarian Olympic marathon team having already obtained a qualifying time, but is preparing for London to secure a place.